Yesterday a good friend of mine reported something to me about an acquaintance of his.  He was fairly outraged about it but I was neither very surprised nor upset.  It seemed that this young lady recently turned eighteen and, after taking one very cursory look at the job market, went to see her doctor.  From him she procured a letter explaining "to whom it may concern" that she suffers from repeating episodes of severe menstrual cramps.  Taking the letter with her, she proceeded to visit the social security office where she filed a request for designation as a disabled person, and she was granted support payments for life.

I do not know her name and I have no way of verifying the report for myself.  However, it is so consistent with the de facto goals of our present society, that I find it eminently believable.  First of all, this removes the woman from ever being counted among the "unemployed" so they succeed in reducing that statistic.  Second, it puts money in her hand which will be spent, increasing the gross national product and creating jobs.  Third, the source of the funds has to be a net increase in the annual federal deficit and added on to the federal debt, which, in turn, is increasingly "monetized" by the federal reserve.  In other words, the payments to her will not ever increase anyone's taxes, instead, the money simply will be printed and then spent.  Finally, since the woman can't, by law, work, and won't have enough money to pay rent on any place for herself to live, she will have to live with other people, and since she has so much time on her hands it can be pretty well predicted that she will spend a good portion of that time doing sex and drugs, which will undoubtedly make more babies to feed and more hospital and perhaps prison requirements, which will make for even more jobs and stimulus for the economy.

Folks, don't fool yourselves.  No one can make an honest living in this country anymore.  The government wants everyone, from Jon Corzine on down, to work a scam, if he wants to survive and prosper.  The very  best ones are legal.
Posted by latent sanity at 7:52 AM No comments:

The Importance of Inflection

"You can cook deer!"
Posted by latent sanity at 4:48 AM No comments:

The rules that people live by must be fitted to the environment and situation in which they find themselves.  The main trouble with religions and religious leaders, not to mention governments and societies and laws, is that the rules that they are perpetrating upon their peoples are always behind the times, sometimes seriously behind.  Always adapted for yesterday's problems, never today's.
Jesus did his best to overthrow all the rules and regulations and petty mores and manners which had grown up among his people and were so sanctified and holified by the levites and pharisees of his day.  Hde wished for all of us to pay attention to God's world, His reality, not our own make-believe constructs.  But tragically, Paul came along and gave the people a whole new set of rules and regulations which they dutifully went about setting into stone and shackling and burdoning themselves once more .... Paul, who hated women and did not care too much more for men, who never laughed a day in his life.

In this day and time, the very most heinous sin which any man and woman can commit, is to bring a child, a new life, into this world.  It should be obvious to anyone who is paying attention to this world now, and what God is saying now, why this is so.  It makes no difference whatever whether the government involved has "sanctified" the union between the man and the woman, it makes zero difference if they ever see each other again.  the sin is in adding to the overpopulation, the Malthusian crisis which we have brought about with our holier-than-thou belief that reproduction is a human "right" and that we must save the children no matter what, all of them.  the bottom line is that every time a new baby is born, the whole system groans and squeezes to make room for one more mouth to feed, when too many are already going hungry.  The whole system cranks and creaks on the energy sector to produce more fossil fuels to use for fertilizer, plowing, harrowing, seeding, insecticides, weeding, harvesting, packaging, and bringing to the market.

If people do not willingly stop making babies, then there will be bloodshed.  A lot.  That's God';s way of doing things.  You'd think we would have learned that by now.
Posted by latent sanity at 4:32 AM No comments:

This is on my mind this morning for some reason.  I've had these formulations in my head for many years but never passed them along to anyone.  Not sure why I'm thinking about sex so much at the moment, but heck, why not?

I'm writing in rebuttal to all the horror stories on you tube and in other media.  The western white-perpetrated propaganda protrays this procedure as being close to butchery, extremely dangerous and with the sole purpose of preventing pleasure for the women.  Usually there are images of rusty knives, screaming young girls, and old veiled women who must be frustrated spinsters overcompensating for their own lack of sensuality.  There's always horror-movie music playing in the background as well, like for Psycho or Jaws or something.

Well, I have (ahem) had up close and personal knowledge of more than one set of female genitalia which had been altered in this fashion.  I am just here to report to you that in my experience, the lowliest Ethiopian woman is vastly more beautiful, hotter, sexier, more playful, more seductive, wetter, and just all-around so much  sexier than the most polished white woman  that I have ever encountered.  I have asked them about the operation and none of them felt like it had been a big deal.  But having their clitoris exposed, not hooded, opens up all kinds of new sensuality for them.  Quite the contrary from the media portrayal, if anything the operation makes them even more desirable, not less.  As always the chief component is attitude, not physical equipment.   In that department, they know how to have fun.  Admit it.  Americans are typically miserable.
Always "going through".  Always "stressed".  Always complaining about the way other people treat them or the things they don't have.

As a final comment, I'd just like to recommend to anyone who might be troubled by the horror stories mentioned above, see if you can pigeon hole an old Ethiopian man sometime and ask him what he thinks about American men having to using Viagra.  Chances are, the laughter will last him for days .....
Posted by latent sanity at 5:50 AM No comments:

I had a long dream last night.

I dreamed that I was in some kind of  nuthouse.  Vaguely it was a government institution. 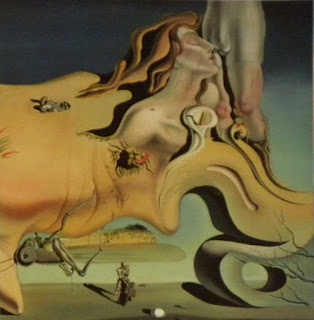 Some of the inhabitants were naked.  Ugly, grossly-distorted genitals, like something Dali might paint.  Exaggerated, lewd glances.  Others were hiding books in their diapers.  A few of them had private rooms, places where they could hide things or themselves, but as I looked around I realized that I certainly had no such privilege.