"In the absence of the gold standard, there is no way to protect savings from confiscation through inflation. There is no safe store of value. If there were, the government would have to make its holding illegal, as was done in the case gold. If everyone decided, for example, to convert all his bank deposits to silver or copper or any other good, and thereafter declined to accept checks as payment for goods, bank deposits would lose their purchasing power and government-created bank credit would be worthless as a claim on goods. The financial policy of the welfare state requires that there be no way for the owners of wealth to protect themselves."

yeah, there is. Oil.

-chistletoe
Posted by latent sanity at 11:39 AM No comments:

Don't it always seem to go,
that you don't know what you've got til its gone.
Pave paradise, put up a parking lot. 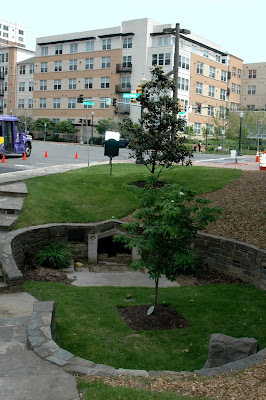 THE COMMUNITY OF SILVER SPRING, MARYLAND DERIVES
ITS NAME FROM THIS SPRING, DISCOVERED IN 1840 BY
FRANCIS PRESTON BLAIR AND HIS DAUGHTER, ELIZABETH,
WHILE RIDING ON HORSEBACK IN THE WOODS BEYOND
WASHINGTON. RAYS OF SUN ON MICA SAND PARTICLES IN
THE WATER CAUSED MR. BLAIR TO NAME IT “THE SILVER
SPRING.” THIS ALSO IDENTIFIED HIS ESTATE AND SUMMER
HOME BUILT IN 1842.

THIS PARK WAS ACQUIRED IN 1942 BY THE MARYLAND
NATIONAL CAPITAL PARK AND PLANNING COMMISSION. IT
WAS RESTORED AND DEDICATED ON MAY 23, 1955 BY THE
FOLLOWING ORGANIZATIONS AS AN EVER-FLOWING TRIBUTE
TO THE MEN AND WOMEN RESPONSIBLE FOR THE GREATNESS
OF SILVER SPRING, MARYLAND, AND ITS BRIGHT FUTURE
THROUGH CIVIC AND COMMUNITY SERVICE.


When I started work in silver spring in 1990,
this little park became one of my favorite lunch spots
and I delighted in finding a flowing spring so near the city.

In the late 1990's, the ramshackle stores and
parking next door were torn down in favor of building
a large, modern department store. The store went
bankrupt almost immediately and was resold for office space.
The process of digging the foundation disrupted the
delicate subterranean capillaries feeding the spring
and it stopped flowing, forever.

Several years later, the little park was restored again,
with new slate walkways, some nice perennial flowers and
bushes, and a few benches. Someone I guess realized the faux pas
and so an electric pump was installed near the spring and
hidden under a steel cover made to look like a big rock.
To date it has not been turned on.

I really don't need to say anything, do I?
Posted by latent sanity at 11:02 AM No comments:

I was on the phone with JT the other day talking about woodworking, when God piped up with the answer to a prayer that I hadn't exactly articulated. He doesn't usually say much to me when I am with other people, and I never, ever, ever find Him in church. But, He can do anything, can't He.

My mother's father was a preacher, and his Daddy before him. He died young but my grandmother always hoped that I would take to the cloth. My Dad's Dad was a newspaper columnist (am I following in his footsteps with this blog?). His Dad was a character … he fled New Hampshire to avoid the draft for the Civil War, got land in the Illinois Territory, and did all kinds of things. He married a young woman that none of our family genealogists have been able to trace and my grandfather was born to them in 1898 (now do some arithmetic!). But his dad, and his dad, and his dad, and his dad are all buried next to the little white clapboard church in New Hampshire where they preached all their lives. The first one of those, of course, left Boston for New Hampshire to steer clear of the French and Indian war. But enough of that.

I guess that I have been asking God this question, in different ways, on and off, for a very long time. There are all these fabulous gifts that He has given me. I have wonderful health, have never broken a bone, had surgery, or any major illness. Though small, I bicycled everywhere I wanted to go during my late teen years and developed incredible stamina, once covering 220 miles with 50 pounds of luggage in 24 hours. IQ tests administered to me in those years consistently came back with the score of 153, or above 99.95% of the population. My memory is still sharp; short term I remember 12 passwords, my and my wife's SS#'s, driver's license #'s, bank account #'s, car license #'s, and I keep my appointment calendar in my head. Long term, I still retain several memories from my pre-kindergarten days.

Besides all those generous gifts there are two more. One is actually many; the verifiable incidents of prescience that occur to me, somewhat at random, at a rate of about 1 or 2 a week. From time to time I “know” something is going to happen when I have no way of knowing. The other, is God's rather verbose communications with me. Sometimes, I chalk that one up to the fact that He is just lonely. Sure, a whole lot of people are sending up requests and demands of what they want and how they think His world should be, all the time. But very, very few people ever seem to pay attention to Him, very few ever seem to listen, or respect and enjoy the wonderful crazy diverse world that He has made. Besides some of His jokes can be a little crude, though still uproariously funny!

I was “reborn”, while lying drunk and half-dead in the cellar of an old church. I was lying in a pool of stale water and old spilled heating oil, in the dark. From the low wooden ceiling were hanging dozens of old spider's lines, with something dessicated wrapped up in gauze hanging from the end of each one like a scene from “The Hobbit”. I seldom speak about it with any person because the term “reborn” is so cruelly misused by so many people these days. For me, rebirth in God was only the first step (actually I had to crawl for awhile before I could walk!). It was like clearing out my ear canal. I realized that He had been talking to me all along, but I had just not been listening. I began a process of throwing out everything that my parents and society had taught me, starting over, and learning about life, and people, directly from God. He showed me that the world is entirely inside-out from the way most people see it, in so many ways. For example, it really is true that every dollar I give away, comes back to me and makes me richer. It also is true that the more money I accumulate, the more burden and work it becomes for me, mainly because of all the other people who try to get it from me by one means or another. He presented miracle after miracle, for my eyes only, to help me in my growth. He taught me that most people are wrong about most things, most of the time. Then, gradually, as I grew older I became more absorbed and involved in the world of other people, more mature and able to stand and act without His direct participation, an adult as it were, and I hear a lot less from Him these days.

Among other things, God taught me a great deal about hypocrisy and preaching. I hope that I do much less of that than I used to. What He showed me, over and over, is that whenever anyone preaches or moralizes or counsels on any subject, he does it because its he himself who needs to learn the lesson that he is spouting. Almost all the time, as we well know, the people preaching or moralizing fail to listen to themselves. That is why preachers go on preaching, politicians go on politicizing, and psychiatrists go on psycho-anal-izing. Because they seldom listen to themselves. I learned, now and then, to listen to my own preaching, and to take heed. Its not easy for me to change my own behavior. But its so much easier than changing anyone else's!

For the last several years, as you may know, I have been reaping extraordinary returns on the stock market. My numbers make Bernie Madoff look like a piker … and mine are real. Yet, I am not rich, or even wealthy in many peoples' eyes. I have given away a formidable share of my winnings. Most of the money has gone to people who were not born into privilege, some people who, due to circumstances out of their control, cannot even buy a break for themselves. A good chunk of what I have made, in fact, has found its way back to Africa. Looking at the Bernie Madoff exposure and the AIG bonuses, I realize that God has protected me from becoming rich and especially from being ostentatious about my lifestyle, because the rich are getting into more and more hot water these days (deservedly so, I might add …). Basically, I am in love with the market. She's my main squeeze, I never tire or get bored with her. The game is everything, the money is just a side effect.

So I have this very general question before Him: what am I supposed to do with all these gifts? What is Your purpose for me? Its very typical for someone of my background to act as benefactor for people less fortunate. Its also very typical to think that, having prescience means that God wants me to prophesy and preach. People, of course, take to my preaching and prophesying about as well as they did to Jeremiah. I have just about the same kind of news to tell as he did and its no more popular today than it was then. Or, am I supposed to just keep quiet and keep stealing money from the market and giving it to people who don't have my opportunities? Perhaps one or more of them is the one that I, like an earlier John, was sent to herald and baptize?

What He said was, “You do not have to do anything. This is not a trade. I don't ask for anything from you. I just give them to you because I love you. Go out and do what you want, and take care of yourself. Have a good time.”
Posted by latent sanity at 5:32 AM No comments: