And the whole earth was of one language, and of one speech.
And it came to pass, as they journeyed from the east, that they found a plain in the land of San Jose, and they dwelt there.
And they said, to one another, “Go to, let us make webs, and join them thoroughly”
And they said, “Go to, let us build a worldwide city and a network, and let us make a name for ourselves, and so they called their city “Silicon”.
And the Lord came down to see the city and the network, which the children of men builded.
And the Lord said, Behold, the people is one, and they have all one language, for they have Google, and they have automatic translator algorithms.
Go to, let us go down, and there confound their language, that they may not understand one another’s speech.
So the Lord created viruses and Trojans, and He created worms. The Lord brought spyware, and malware, and adware, and botnets. He brought “virus protection software” to steal resources and charge for the service, and He brought help desks and security czars to bog down, shut down, arrest and frustrate all those with imagination and vision. He brought hackers and leakers and service interruption attacks and identity theft.
So the Lord bogged down the network til the weight of the overhead brought all creative endeavor to a complete standstill.
And He brought crushing debt upon the region of San Jose until all city services came to a halt.
Therefore is the name of it Gaggle for it soundeth and meaneth like the calling of geese.
And he brought Menlo when the speed of all communications reached Park.
Posted by latent sanity at 11:46 AM No comments:

Thus the heavens and the earth were finished, and all the host of them.
And the Lord God formed Woodrow Wilson and caused him to be elected
From the dust of the nation. And He gave him dominion over all the land
And all the citizens.
And the Lord God commanded the man, saying, “of every effort thou art
Free to tax, but thou mayest take only what thou needest, thou mayest
Not create a central bank thereupon to take and keep and withhold from
The people, for if thou creates a central bank thou shalt certainly die.”

Now the banker was more subtle than any beast of the field which the
Lord God has made. And he said unto Congress, “Yea, hath God said
Ye shall not create a central bank?” And Congress said, “We may tax any
Fruit of the garden, but God said we may not partake of a central bank.”
And the banker said, “Look ye, woman. See how the economy goes in waves
And in circles. See how the hard times follow the good times, see how
The citizens suffer joblessness and hunger, in cycles. Know you that risk
Can be mitigated? Did He tell you that you can take compassion on your
People, help them out, and buy their votes in the next election? Did
He tell you that you can have higher highs, whiter whites, and new and improved
nigh unto eternity? Perhaps He wants to keep all the fun and glory to
Himself? Have you ever thought about keeping a little reserve?”

And Congress took a bite of the apple, and handed it to Wilson, and he also
Took a bite, and they found that it was sweet and juicy, and they wanted more.
And so they created the Federal Reserve. And henceforth,, when there were good times,
The tax receipts were plentiful. And when there were bad times, the Federal Reserve created more paper money and created money to be borrowed, and the losses were postponed, and the
Tax receipts were STILL bountiful.
And they created insurance companies and the FDIC and the SEC and Fannie
Mae and Freddie Mac and Social Security and Medicare and Medicaid and nuclear deterrents and all manner of protection against all manners of losses, any loss that anybody could think of or imagine.

And one day it came to the attention of the man in the street that one loss, one little possible loss, had not been insured, contracted, mitigated, indemnified, incorporated, or otherwise protected against, and that was the loss of everything-all-at-the-same-time. The whole nine yards, the kit-and-kaboodle, the cat’s meow. And other people began to read and to hear and to understand and to fear, against this one little item. And a fifteen minute call to Geico went unanswered. And all of the preachers and the Pharisees and the Sadducees arose and penned opinion pieces for the local newspapers that such a thing could never come to pass and y’all need to quit worrying about it and go back to cheering for American Idol and the Pittsburg Steelers. But real estate prices fell and people lost their jobs and had their homes foreclosed upon and the dark clouds continued to build over Noah’s town and the people became more and more fearful…

…
He sent forth a dove from him, to see if the waters were abated. But the dove found no rest for her foot, and she returned to him. And it came to pass in the six hundredth and first year, that the waters were dried up from the earth. And God said, look okay, I did it again. But still I have not destroyed everything. I give you another chance. But please, this time, stay away from snakes and bankers!
Posted by latent sanity at 6:27 AM No comments:

None can compare with this one.

Do I really have to say anything more?
Posted by latent sanity at 8:18 AM No comments: 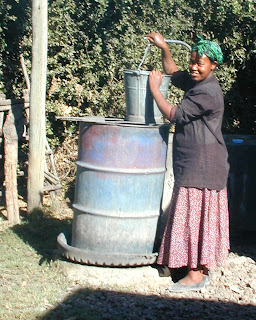 So many of my experiences in Ethiopia were of the kind that "you had to have been there." On the other hand, so many of my peers now suspect or accuse me of such dark pessimism, and they just don't know, so feeble as they may be I will make some attempts.

"Sitaka" means "gift" in our language. This was the name of the live-in servant girl of the family where I stayed on my first trip. Yes, there is that dirty little secret that the National Geographic and all of the "save an orphan" organizations do not want you to find out, namely, that most of the middle class in Ethiopia have live-in servants.

She must have been around seventeen. The occupation is a major alternative for a young woman who does not accept an early marriage (choices of schooling and other occupations are very limited.) She worked from around sunup to around sundown, seven days a week. Her pay consisted of her own little room, and food, the same as the
family, and a stipend equal to $20/month.
She had all sorts of activities and it seemed to me that she was always busy. She prepared most of the meals and she washed the dishes afterwards. There was a single faucet in the back yard, the extent of the running water in the compound. She did the dishes in the sun and let the brightness dry them. She swept out the entire compound every day. She fed the chickens and the cat. She washed all of the laundry, bending over two large pans on the ground that looked like the bottoms of oil drums, hung it on the line to dry, pulled it in before evening. She owned two sets of faded, raggedy dark outfits that she alternated; those were probably all
her possessions in the whole world.

Sitaka turned my whole understanding of the world completely upside down, as I spent weeks and weeks watching her, interacting lightly. She never worked hard but always went easily, lightly to her tasks. She sang, usually softly, sometimes more loudly, while she bustled about. She played, with Tadios, with the chickens, with the cat. She was ALWAYS smiling, she was ALWAYS happy; Nagast even said about her that she was the happiest person that he even knew.

This simple truth, that we tell each other, in church, and to our young people and in our greeting cards and our little sermons to one another, but none of us believe it for a moment and no one would dream of giving up anything they had to attain what she has ... but that is what you have to do, that is all you can do, put down your own stuff and trust in the Lord, and thank Him constantly
for everything He gives you. There is no other way to happiness.
If that is really what you want.
Posted by latent sanity at 2:48 PM No comments: