My computer makes a joke.

Please regard the following backgammon position: 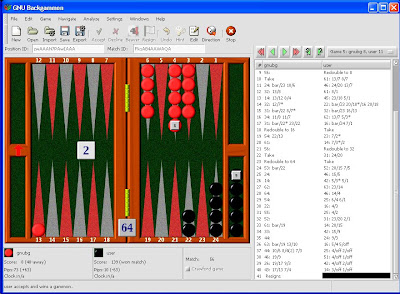 (If you don't play this game, I'm sorry, this will take too long to explain.)

As you see, I am playing against the computer.
As you know, backgammon is a sufficiently-limited game such that the computer can,
from any position, work out all of the possible eventual outcomes and
compute the exact probability of winning or losing.
The dice enter an element of randomness into the game.

Now, never mind how we got into this position in the first place.
It had to be an interesting game, such that
the computer and I doubled and redoubled all the way up to 64.
What I want you to look at is the current situation.
It is the computer's turn to play.
Now if you know the game, the computer has a 100.0% chance of losing at this point
but it has a clear majority of a chance to get one man off
before I get all mine off, thus saving itself from the gammon.
I still win the match, probably a very important issue,
because the match is only to 50.

Pure fatalism.
and you thought only people get depressed ....
Posted by latent sanity at 3:49 PM No comments:

The markets can not and will not ever be stabilized.
It is not their nature to be stable.
The crowd, the majority, is always wrong.
The markets will always go in the direction which prove the most people to be wrong.
No system, no "risk management", no regulations, no "manipulation" will ever be able to stop this from happening.
The markets are made up of the billions of individual decisions of all the participants.

Mother Nature herself works in cycles, tiny and small and medium and large cycles, day and night, winter and summer, warm eons and ice ages, birth, growth, decline and death.
Man always dreams about stability and constancy
but life itself is not like that and can not be made to be like that.

The readers of this message base have had the privilege of living through the richest, most complex heights that civilization will ever attain. We are all now facing decline and crumbling. This process is larger than any individual, no matter how heroic, or any institution. It is inevitable, though poorly understood by most. The direction will not be constant, there will be "indian summers". The ultimate outcome will be far fewer people on earth, far less connectivity
(The Internet is going the same route as the Tower of Babylon),
far more languages, less travel, less knowledge, less trade,
simpler device and tools, more interpersonal contact and people helping their neighbors for no personal gain,

-chiz
Posted by latent sanity at 6:04 AM No comments: