The folk that I make music with
are all up in arms about gay marriage,
trying to get a referendum on the Maryland ballot
and insisting that the Bible is very clear about this sin.
(Last time I checked, there's nothing in the ten commandments or the gospels about it,
but they still find room to debate about "Thou shalt not kill".....)

I've managed to somewhat besmirch myself in their eyes by saying,
basically, that while its nasty there's a whole lot worse problems
that they ought to be paying attention to right now.

Its going to be more than amusing to watch them squirm
if Obama comes out in favor of gay marriage ...
the gay community and the republicans have him i a corner.

It does not matter, Romney will win the election.
The republicans in Congress, those who can still do arithmetic,
set a trap for Obama and he fell for it hook, line and sinker.
they went ahead and quietly passed his latest payroll tax cut.
The net result is that the new debt ceiling is now going to be breached
a month to six weeks before the november election.

Obama will be forced to cut short his campaigning to return to Washington
to deal with the fight
and they will make him, look bad, bad, bad.

me I don't care, its all charades anyway,
but its pretty amusing ....
Posted by latent sanity at 1:20 AM No comments:

I did my tax forms via turbotax this year.
I've believed for years that folks at my level or above
throw a red flag if they try to do them themselves,
and there are so many new wrinkles like the AMT and the Make Work Pay forms
that its unlikely they will be done right....
37 pages of forms this year ....

....i filed them but my refunds looked suspiciously large
so I went back and checked and found a $20K error,
generated by their software ....

...they have been nice enough about it,
and we are working together so that other customers of theirs don't get caught the same way
and of course I have to do mine all over again,
royal p-i-t-a ....

we invented computers to make life easier for people,
but the powers that be have used them to make everything more complicated instead,
so that everybody HAS to have one ....
Now I wish we hadn't done it ....
Posted by latent sanity at 4:33 AM No comments:

As you probably are aware,
I have become highly suspicious of the U.S. medical system,
as its core philosophy has changed from healing to making money.
One of their activities, in my observation,
has been the invention and generation of "maintenance diseases",
so-called maladies which are never cured but which require
regular visits to the doctor and regular medications.
One of the activities of the powers that be, carried out
both through the mass media channels and the education channels,
is an intense campaign to frustrate and make impotent the citizenry.
They are highly, highly successful, but only a visit to a radically different
culture can reveal the extent of their success.
A fish is totally unaware of water, not until he gets out of it does he have any clue.
One of the results of this campaign is that common people are driven to
spend more and more money to relieve their angst. (which does not work!)
Another is the appearance of all sorts of outward physical manifestations.
Still another is the random outbreaks of insane violence.
If the angst were cured, I am convinced that all sorts of these
"maintenance diseases" would disappear with it,
I am including allegies, which I believe to be total fabrication,
but also asthma, most diabetes, and a host of others.
I may be wrong but it has certainly been 100% successful for me.
Happiness cures all kinds of things and its free.
Prednisone is a very dangerous medication.
It is addicting and the withdrawal symptoms are extremely difficult.
Please be cautious of it.
Posted by latent sanity at 4:09 AM No comments:

Let us commence with "If God is omnipotent, then can He make a rock so big that He cannot move it?"

David Hilbert and Bertran Russell, among others, were noted logicians who were right on the cusp of solving this problem, and all others, convinced that a logically-consistent model could be described. Their efforts paralleled Michelson and Morley who were on the verge of proving that light passes through a medium they called "Ether"

Much as Albert Einstein dashed the hopes and shattered a number of hitherto rock-solid theories about matter and energy, a short young paranoid boy named Kurt Godel (what a name, huh!) produced a 26-page proof which states, basically, that NO system of logic, designed and conceived by man, can EVER be created which does NOT embed some contradictions within it.

Quite a few people were upset by these new developments; they were more extreme than the scientific proposition that man, in fact, is NOT at the center of the universe, the earth is NOT flat, and the sun and planets do NOT revolve around it.

Anyway, none of this is exactly what I want to write about today.

God promises, in the Bible, and Jesus reiterates, that the way to gain everything is to give everything away. I'm not going to look up the passages right now but I know you've heard it and I know we all find that a little confusing and u8nbelievable.

I think I have told you all that I went through a period of several years where God took me by the hand and retaught me everything that I had learned or been taught up to that point, through examples and constant conversation. This was one of the issues that He took up with me.

My workplace took up a generalized collection during christmas, something like United Way, and one year they adopted the slogan of "It all comes back to you." By way of experimentation, I chose to make a quite large gift to the fund. Lo and behold, I got a call from top management that I had been chosen as an example for everybody and I would be receiving my entire contribution back as a check. On the one hand, this seemed like a pretty absurd thing for management to do. On the other hand, God was making a point to me.

In the years that followed, I found myself more and more often making large and extraordinarily generous gifts to people. One of the largest was to take in a woman who was suffering from advancing multiple sclerosis, and the returns I got for everything I did for her were simply beyond description. God kept His promises to me and every gift that I made was returned promptly to me. At the very beginning of His tutelage I had in fact been living homeless, sleeping in my car, bathing at the local public athletic facility, storing my possessions in a public storage facility. But I had a few funds in the stock market and within several years those investments increased, again I believe with His guidance, to the point where I AND people around me began to think of me as "rich".

The most egregious move I made was to purchase a cleaning franchise on behalf of a woman I deemed as worthy and capable but because of circumstances (she was 1. black 2. an immigrant 3. a moslem) she could not even BUY a job. The trick was that by that time, I was so accustomed to God returning me my money right away that I was counting on it.

Well, so He didn't. I won't go into details, but the whole experience was exasperating for many people for many years.

and that's the conundrum.... for so long as I, or you, give without the slightest hope or intention of receiving anything back, you will get it all back. But as soon as you go expecting to get something back, well then, you end up getting nothing but trouble. 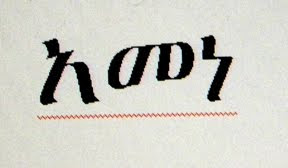 I know you did not come here looking for a language lesson, but that is what you get today.

By the way, I think we can safely ignore the red line ... I really do not believe that Microsoft thinks this word is misspelled or that the workers there can pick their own noses without a book of instructions to guide them.

The above pictograph is a word. The script is from an alphabet (or, more properly, an "abugida") which serves numerous living and dead languages from an area of ancient civilization. The language, spelled phonetically in our alphabet according to the way it is pronounced within itself, is "amarinnia". I have no phd in linguistics or etymology so I certainly do not have the authority to insist as I do, that this is the closest living language to "Aramaic", spoken across the ancient world before and during the time of Jesus.

With just a little bit of imagination, you can probably even see the word "amen" in those figures above. This is not accidental, for although the script with its 460 plus different characters at first appears mighty strange, it is in fact also derived from that same basic set of stick figures which was first scratched in stone somewhere in the Sinai desert and became the basis for greek, roman, and even arabic writing.

The word itself will also sound amazingly similar to a very common english word, at least in some circles.

It is a verb and in that language the verbs are conjugated with an enormous array of pronoun-similar prefixes and person-dependent subject and object prefixes and suffixes ... in fact the result is so very many that no one ever writes them all down together.

Here's a few, spelled phonetically in our character set:

Do they sound a bit like words you have heard?
Words that maybe, you might be very very familiar with but you might really be put on a spot if anyone asked you to define them???
This verb means "to believe".

Is it all coming clear now?
Posted by latent sanity at 3:53 PM No comments:

Pastor was talking about his conscience this morning ....

There were woods on both sides of the street where I grew up, behind the houses. On the far side there was an intermittent stream that ran between banks of clay after a rain. When I was a young boy, around six or seven, I used to go down there and build a system of dams and lakes across the little stream out of the clay.

One time I remember clearly when I arrived there I found that a swarm of yellow jackets had built themselves a home in the clay bank. Annoyed, I placed a flat rock over their hole.

I then could go to work on my construction enterprises. You see, my penchant for industry and building things goes back a very long ways. However, as I worked, the prison and the prisoners that I had created began to worry at me, and I grew more and more fretful about what I had done. Finally, I could not stand the guilt any longer and so I went back and rolled that rock away.

Nowadays, I look back at that incident and I realize just how formative it was, because ever since then I have had this tendency not to always want to listen to my conscience ...
Posted by latent sanity at 3:34 PM No comments: