So the newest report from the WHO has updated the "worst case scenario" from 20,000 to 250,000 or maybe even 500,000.  That is quite a jump.  People are realizing that there isn't anything stopping or even slowing down this wildfire.  The number of cases is doubling every three weeks.

There are some factors which are making this outbreak so much virulent than previous outbreaks.  They are not hard to identify.  One obvious culprit is the population density.  The number of human beings on that continent has doubled, twice, in the last couple of decades.  Ultimately, it was the good intentions of a lot of compassionate, concerned westerners who insisted upon feeding and medicating as many african children as possible, which made this possible.  Anyway, the gifts of foreign aid have been miniscule in comparison with the remittances, the money and gifts which the diaspora send home to their own families.  Most of the increase has jammed itself into cities where personal space has become unimaginably tiny by western standards.

Another, slightly less obvious culprit is the greatly increased mobility.  The influx of cars, busses and trucks has been enormous.  No longer is the continent made up of millions of tiny, isolated villages.  People get around.

So far the media, always eager fearmongers that they are, have not yet caught up with the real dangers, the real threats.  Even in the epicenters of the infections the number of people dying of ebola is still dwarfed by the number of people who have been and continue to die of the major scourges of malaria, tuberculosis, and AIDS.  Each of those diseases is still claiming ten to fifty times as many victims every day.

In Liberia, Sierra Leone, Senegal now, the fear is spreading to everyone.  Shopkeepers are closing their shops, customers are staying home.  Porters are not bnringing their goods into the cities.  People avoid taxicabs and busses, not knowing about the health of the previous tenants.  People avoid opublic places, avoid conducting business of any kind.  All commerce is grinding to a halt.

The real danger is this secondary panic and shut down response.  As goods stop flowing, death and destruction creep in from all sorts of secondary damage, from starvation, thirst, and of course from the lack of spare medical support personnel.  Policing also takes a hit while criminals willing to risk infection can have a field day.

Having travelled extensively in Africa and dealt personally with many Africans, I am keenly aware of the strong cultural differences, how much more they converse with each other, how much larger their circles of friends and acquaintances are, how much more physical contact they enjoy with strangers, with acquaintances, with friends.  Personally I've always respected and admired them for that and wish those traits cold be just a little more common here.

However, our cocoon mentality, our towering fear and mistrust of everybody, our neighbors, shopkeepers, and anyone we meet on the sidewalk or riding public transportation or passing in stores, will have a huge dampening effect.  Yes, the infection will show up here.  There are just too many people making the trips back and forth.  but it won't get much of a foothold here, it will not spread very much.

However, the fear is already here.  Already, if you read news stories and commentary, and then you scroll down to the commenting sections, you will see anguish and the seeds of panic.  They show themselves in very ugly expressions of zenophobia, racism, and other forms of hate.  People protest any form of help anyone wants to offer for the nations and individuals now under such diress.  They seriously talk about total quarantine, as if it were possible to completely seal the borders of those countries when we can't even seal our own borders.  They talk about forbidding re-entance for any selfless medical workers who may have come down with the infection.

Once the disease comes here, and it will, if it has not already, and the general population will find out, then, you can expect the panic to really take over here and really get out of control.  Because we are culturally virtually petrified with fear already, because the media and the politicians, and the pundits and the medical establishment already bombards us constantly with millions of different possible and impossible worries, because it has become fashionable to fear ones own shadow, fashionable to arm our police with weapons of war, to make our schools into concentration camps, to put cameras and microphones and helicopters everywhere, very little more will be necessary to make our whole economy freeze up like an internal combustion engine when all the oil drains out.

If you have enough white swans all in the air at the same time,
they can block out so much of the sunlight that everything appears black.....

In my estimation, the very worst of all of them in the air right now is the one that the media is not talking about.   I am referring to the beginnings of total economic collapse in Japan ....

Posted by latent sanity at 5:01 AM No comments:

This is pure speculation on my part.

Most of the financial writers and commenters these days seem to agree that the primary force which has been raising the markets these past 6 years has been the Federal Reserve policies, promoting easy money forever.

Most of the world observers (not counting the opinions of the world's richest man, or men, because they just may be a bit too biased), believe that the overall situation of humankind is more perilous than ever before.  There are more different serious crises developing all over the place than ever before.  Gaza, ISIS, the Syrian rebellion, the west's efforts to foment war in the Ukraine, Libya, Venezuela, Argentia, Ebola, the extreme drought in the US southwest, the Chinese bubble, the Japanese demise, Ferguson and the other police state issues in the USA, the eligible unemployed all over the world and especially among the young ...the list just goes on and on and on.

But virtually to a man, the traders all say that any significant downturn is extremely unlikely because of the damage it would do, not only economically but in setting off protests and more violent forms of unrest, worldwide and including inside the USA.  The Fed can, and will, print to infinity.  Those of us who are long term, experienced traders can point to all kinds of signs suggesting that even as the Fed is publicly announcing "tapering" and imminent rate hikes, it is clandestinely acting through more and more routes to sustain and raise the markets and put even more money in the hands of the very wealthy.


So the markets are between a rock and a hard place.  Can';t go up, can't go down.  they still do what they do best, oscillate.  That way, the insiders can still make gains every single day and most of the retailers who try to trade frequently will end up losing.

We are not going any place, fast.  Like Alice and the white king. Up and down, up and down.  Just like sex.


Posted by latent sanity at 9:51 AM No comments:

so if the black helicopters come and pick me up tonight and I disappear, here is what happened:

My loyal readers already know that I am the quintessential pessimist.  Always the good boy scout, I just do my best to "be prepared" for any consequence.  The lifestyle has amazing benefits; I am so rarely caught be surprise by bad news, instead almost everything unexpected is delightful.

Maxims I have learned in years and years of investing include the ever popular, "buy low, sell high"  Um, the market is hitting all-time records these days, no?  Another favourite learned from childhood is "What goes up must come down."  So far Vanguard I seems to be the only exception known to man.

So I'm a fundamentalist, but I certainly have learned more recently that once the market establishes a direction, or trend, it has a tendency to continue on in that same direction for much longer than it makes sense to do so.

But nevertheless, when just about everything seems overpriced to me, like when these incredible valuations are given to IPO companies that don't make any product at all and don't make any profit at all either, I tend to be looking pretty hard for shorting candidates.

And with the US Government aggressively looking to start a war with Russia (or anybody else, for that matter), and with their heavy reputation, deserved or otherwise, for concocting false flag operations which often have involved passenger ships or airlines,

And with a company which has already declared bankruptcy once or twice, raped all of its employees for their pensions and benefits, and never made any serious money, now enjoying its best revenues ever but trading at 50 times earnings on a 1.8% profit margin,

and me still having three balls, even if I don't use them as much as I used to,

Two days later a story comes across the wire of a plain clothes US air marshall being hit with a possible terrorist-inspired hypodermic needle in an airport in Nigeria and he promptly flies to Houston.

There will be copy cat performances.  There's a whole lot of folk who have a whole lot of reasons to hate the USA, and here's a new, fascinating way to strike back, extremely difficult to prevent.

There will be fear.

And they will need a scape goat.

peace love,
Posted by latent sanity at 4:09 PM No comments:

Here are some photos I took in Narva.

This argument, apparently, has been going on for quite some time. 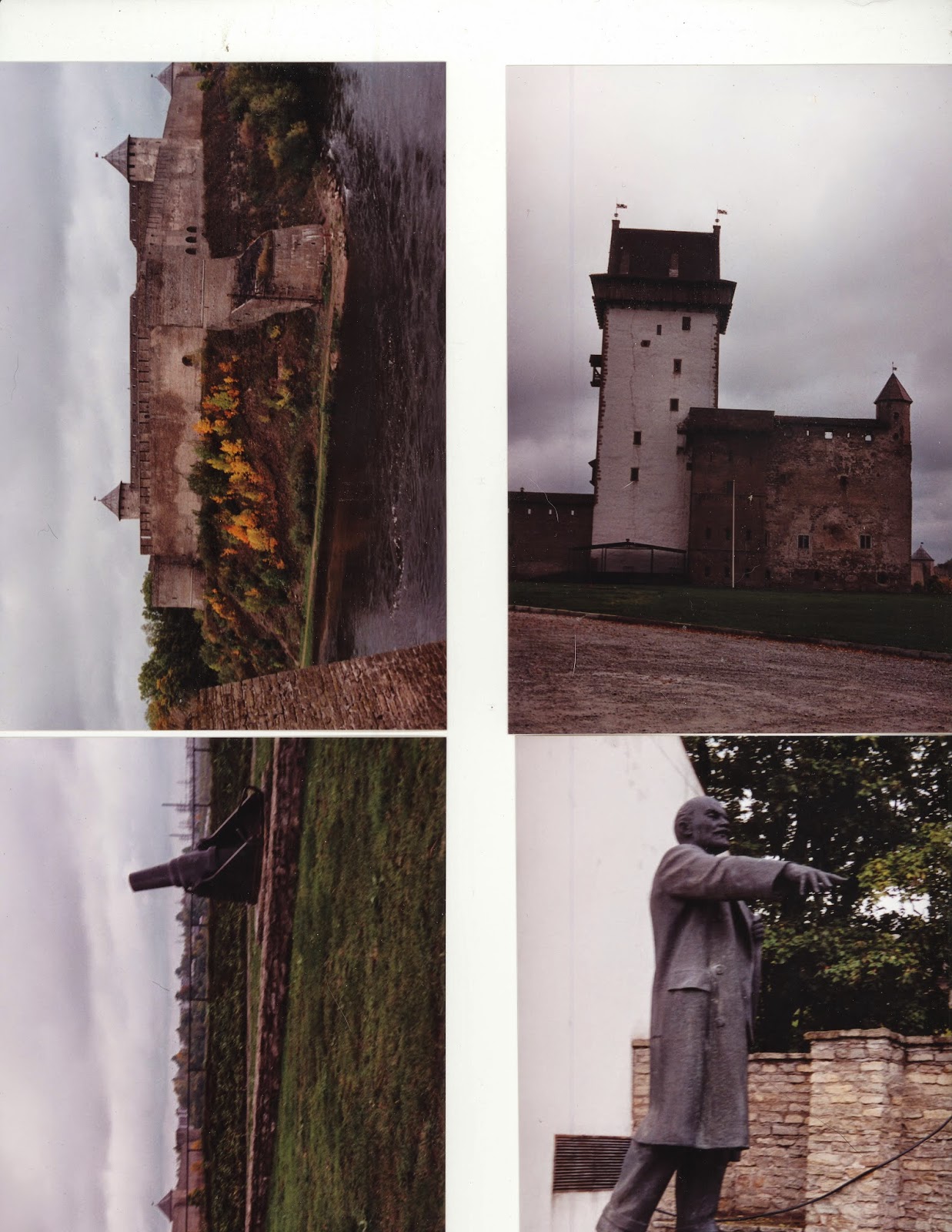 Posted by latent sanity at 4:54 AM No comments:

about time.
What are people thinking?
Can there really be anybody who cannot figure out that since the iphone 5 came out,
Apple has nowhere to go but down?

Apple is the next GM ....by the end of the decade, they will be coming to the White House requesting their first bailout ....

Seriously.  The next news item is going to be about a recall, following reports of accidental deaths which the company has been trying to hide.  This will come out at the same time as the announcement that Microsoft is recalling Windows 8 ....
Posted by latent sanity at 9:35 AM No comments: