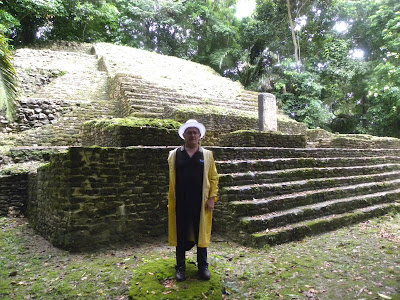 Recently I had occasion to visit the Mayan ruins at Lamanai, Belize,
and listen to the enlightened guide of Carlos from "Lamanai Tours", Orange Walk.
(I highly recommend them, if you are down that way...)

Lamanai was one of the longest continually-habitated cities of the Mayans,
located some 8 kilometers from a major stone quarry on the New River lagoon.

Carlos said that when the spanish first arrived in the new world
and found these civilized inhabitants they asked them, in spanish, who they were.
The residents answered, in their own language, that they did not understand.
The sentence sounded like "mayan" to the spanish, and the name stuck.

Carlos explained about 2012 that Armageddon is just a Hollywood fabrication ...
that the Mayans did, indeed, have a circular calendar
and that one of the calendar's units was (is) a 52-year period
that just happens to end again in 2012.
The last one ended about the time of Kennedy's inauguration ....
The next one will end in 2064.
Circles have this quality about them, they just keep going around and around,
they never end ...

Carlos also talked about the devastation
that the spanish brought to the Mayans,
how Pisarro captured their king, held him for ransom,
and when the gold was paid, killed him anyway.
He also told how it was really the diseases of europe,
(among them syphilis, small pox, and tuberculosis)
which devastated their population and civilization even more than the spanish guns.

But what was even more interesting to me was
when he explained that the Mayan civilization actually went into a decline
spontaneously, around 900 AD, long before the spanish arrived.
Their calendar and indeed a whole system of hieroglyphics
had been developed prior to that time but reading and writing fell into disuse
and the whole population and economic development declined.
He voiced the question of modern scholars, "What happened?"

I know what happened.

At a certain point (it doesn't matter where!)
the general population of a civilization will reach a point where,
in their collective imagination,
there is precious little room for the civilization to grow.
There are no new frontiers.
At that point, the civilization will gradually turn from
productive, growth-oriented strategies to strategies
which are meant to defend or secure or hold on to what people have.
And because growth stops, those strategies of just trying to hold onto what we have
are doomed, by the law of entropy, to fail.

Everything in God's world works on cycles,
up and down, around and around.
Nothing stays the same, nothing goes up forever.

From a distance, its not that hard to see.
Posted by latent sanity at 7:11 AM No comments:

I have been saying this, over and over, for years,
and even though it just seems to generate jealousy, resentment and anger,
instead of anyone simply following my advice,
I will say it again:

Over the next twenty or so years,
the USA is going to become the "West Virginia" of China,
meaning that we will become impoverished
and our major economic activity will become the mining and exporting of coal.
Those who do not own it will have to work in the mines.

Here is a wonderfully-written synopsis of
economic events in the USA and the world over the last 30 or 40 years,
written by a Canadian banker ... it is long, very colorful, and worth finishing, imho:


"Anything which cannot go on forever, will stop."

A compendium of facts collected from a wide variety of sources, and my inferences therupon.

the installation cost:
"I asked the company Vestas this question. They are number two in the world in producing wind turbines. They told me the answer is based on a thousand factors but that the general rule of thumb is that wind turbines cost 1.3 to 1.5 million per megawatt. "
http://wiki.answers.com/Q/How_much_does_a_3MW_wind_turbine_cost

"The American Wind Energy Association has reported that wind projects installed through the end of 2008 were expected to generate 52 million megawatt-hours/year (MWh/yr),"
(source):http://en.wikipedia.org/wiki/Wind_power_in_the_United_States.

Okay, now its time for one inference from me.
This is a mere calculation:
If anyone has a stated goal of replacing all of the existing coal-fired electricity generation in the USA
(and assuming, for the moment, that electricity demand does not increase),
2,000,000,000 mWh divided by 8500 hours/yr is about 250,000 mWyr.
250,000 of the largest commercial wind turbines.

If they cost $3 million each, as above, thats a total of $750 billion, or roughly the budget of DOD.
And, after building them, you have to find someplace to put them. Not in my backyard, please.

I just have to wonder ...
how much coal has to be burned (in blast furnaces) in order to fabricate one large wind turbine.
I imagine that its not insubstantial. There is still no other way to make steel....
Posted by latent sanity at 8:03 AM No comments: