...so who took my advice and invested in natty?

This just out from EIA:

...but you really have to look at the chart on their website to get the full effect....we are headed for a shortage, a serious, frightening shortage....

I have more to add that I have not said here yet ... Wall Street is still panning the gas drillers
(I believe there are only about two rigs left, lonely little critters ....) The anal-ists still believe that drillers think the way they do, in nanoseconds, that the drillers do not remember how many false hopes have arisen in the last six years since the collapse, or how long it has actually been since the prices paid for gas were actually higher than what it costs them to get it out of the ground and out to market (which they have to do with one hand because the other hand is occupied fighting off the extremist environmentalists who want ALL of the benefits but NONE of the risks).

What that means is, they are not going to rush right out and buy new rigs and go drill.  Not because of one or two months worth of high prices.  Anyway, its cold outside.  No one likes drilling in North Dakota very much when the temperature in the morning is 25 degrees below zero.  The drillers are pretty happy to let things ride as they are, allow the inventories ride on down to zero, let a few Wall Stereet twits find out what an unheated, unlit office feels like ....let a few tree huggers stick out their tongues and get stuck there ... and let the prices rise to a decent level and stay there for at least a couple of years ....

This is my newest girlfriend. 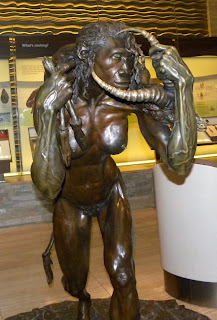 Posted by latent sanity at 8:45 AM No comments:

Most people realize by now that the U.S.A. is becoming more stratified than any nation before in history....there are the four hundred or so white males who own, together, approximately half of all the world's wealth and then there are the rest of us.
And those four hundred or so realize that they had best do something pretty dramatic to distract the rest of us from redesigning the guillotine.  Usually, war has more drama than anything else.  But the arabs have simply refused to cooperate in this effort.  so.

Lets review the history of the U. S. military in the past sixty years.  Lets strip out their false statistics and propaganda and gloss, and just tell the unvarnished truth.

First there was a war with North Korea.  A backwards, undeveloped, feudal nation.  We lost.

Then there were several years of peace and actual prosperity.

Then, by inches, then by feet, then by yards, and then by miles, we went to war with another tiny, backwards, feudal nation in the far east, North Vietnam.  The press and the politicians all told us about the evils of communism and if we lost here then, domino by domino, they would take over the entire world. Between 200,000 and 400,000 south Vietnamese civilians were killed by our military.  Between 500,000 and a million were killed or maimed by agent orange alone. the Viet Cong reported over a million soldiers killed.  And the U.S. military reported over 50,000 Americans killed and 150,000 wounded.  The national debt soared, the federal budget exploded, the arms makers made fortunes.
We lost the war.  The world did not turn communist.  The economy of Viet Nam under the communists has recovered and grown remarkably in the ensuing peace.

Our chosen dictator in Iran was deposed.  150 American terrorists disguised as military personnel were taken prisoner.  An effort to free them by the very best minds and equipment U.S. money could buy, failed.

Then our country was attacked by a small group of men from Saudi Arabia.  Incensed, we united as a country behind our flag (all American flags are now made in China) and went to war.  However, we are far too dependent upon the oil from Saudi Arabia to go to war with them, so instead we went to war with two other countries nearby.  Perhaps our five star generals need new glasses?  Or new maps?  Anyway, we have been fighting these two wars against two of the most backward nations in the world, for like over 10 years now, and spent literally trillions of dollars making the arms dealers, once again, richer than ever, and exactly what have we accomplished?  We still can't leave because that would be admitting that once again we have lost.  But since there was nothing to win in the first place, how could we do anything else?  We have devastated their societies, their social structures, their infrastructures, we have scared the bejeezeus out of their civilian populations by raining death down upon them indiscriminately.  We have made a hell of a lot of good people angry with us, new enemies that we did not have before.  But we still can't or won't leave....

Next up is China.... most populous nation by far in the world, larger in land mass than the U.S., having more resources, coal, oil, copper, iron ore, rare earth metals, mountains, rivers, farmland, desert, and smog. An economy that has boasted the most improvement worldwide for decade after decade.  They are hungry.  And they want what we have been bragging to them all that we have.   I can't wait until they land the first landing parties in Monteray ....
Posted by latent sanity at 7:38 AM 1 comment:

I can hear it already.

I better go pack my bags, I've only been here ten generations
and I believe we have lost the original VISA granted by the Algonquins ....
Posted by latent sanity at 6:18 AM No comments: