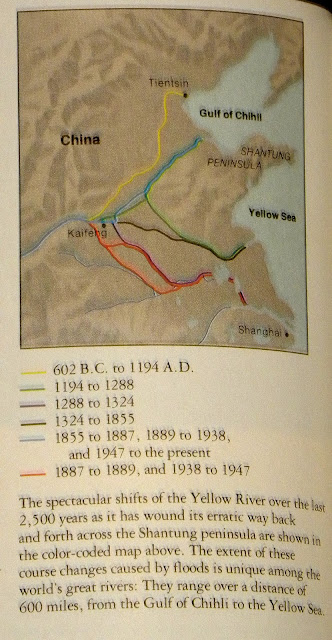 (For scale reference, the distance from the top of that little map to the bottom is approximately 800 miles or 1300 km.)

"The notion of blasting open the dike must have seemed like the only recourse to the Kuomintang general who on June 6, 1938, was confronted by Japanese troops preparing to advance from near Kaifeng against the key railroad junction of Chengchou at the village of Hua-yuan-k'ou, the general ordered his troops on June 9 to break down the main dike of the river.
The result was beyond his darkest imagining.  Far from merely creating a local flood that would stop the Japanese -- as it assuredly did -- the breach sent the entire Yellow River pouring to the southeast.  The deluge covered more than 9,000 square miles, drowning an estimated 500,000 Chinese and leaving six million homeless.  The plain remained flooded for seven years; when Japan surrendered, two million acres of fertile farmland were still waterlogged."

Posted by latent sanity at 5:22 AM